Secrets of the Sidewinder Caverns

This is a long quest so make sure to bring food and potions. Glimpse or Xray vision is not essential but will help a LOT. Also see invisible will help in one of the later maps.

Step 1: (Not neccessary but provides background for the quest) You will go to Bandar Gah and enter the house above the palm tree. The old hag Agorim will tell you about a quest and the collector. She will tell you to go to a Merchant in Jbel for more information. 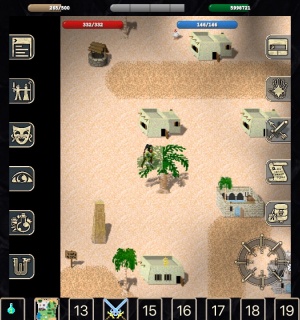 The Merchant's house is the first one on the right after going to Jbel (pictured below). He says he will help you find the collector if you help him first. Dark elves have stolen his treasure and he wants it back. He says they are north of Minath but that was before the map change, the elves are actually northeast of bandar Gaah in the underground city known as Tehur. 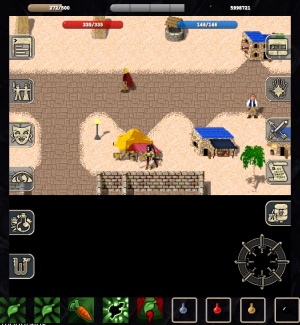 Step 2: This is where the quest begins, enter the cave and navigate your way to Tehur. 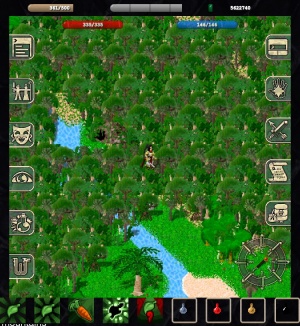 The first map is a maze, the exit is on the left side so you'll have to head southeast for a bit and then south west until you get to the next map. (exit pictured below) 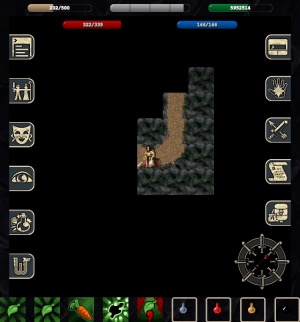 Step 3: Go through the maps, there will be some ants, soul takers, fire elementals, and then Drows with Green dragons. After the drow map you will enter a new maze called "entrance to tehur". The exit to this one is near the Northwest corner.

Step 4: You are now looking for the bank, there are some very dangerous monsters so don't go through every door. Make your way to the top right of the map with some water and a bridge. Step 5: On the next map, the bank is located through the second doors from the left 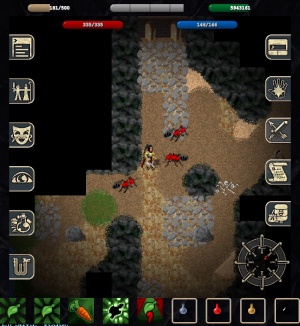 Step 6: There will be barrels and trolls, push the barrels to find stairs and go downstairs. Downstairs you will see a Pyrite Nugget. Take it and bring it back to the Merchant in Jbel. The pyrite will stop you from using Recall so you have to navigate back out through the mazes. 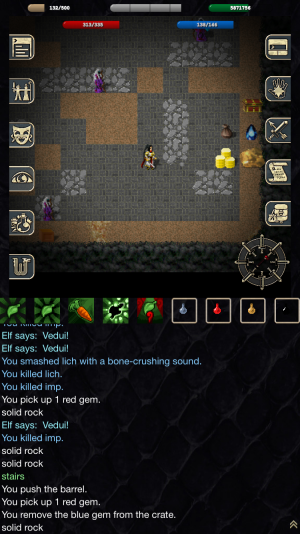 Step 7: Give the pyrite to the Merchant in Jbel, he will give you a small ruby. 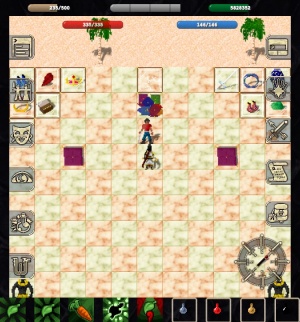 Step 8: Go north of Bandar Gaah (across the ocean to the belly of the Wyvern map) to a cave that looks like a Snake. If you have trouble finding it, it is south of Casino Island and north of Stoneybrook. 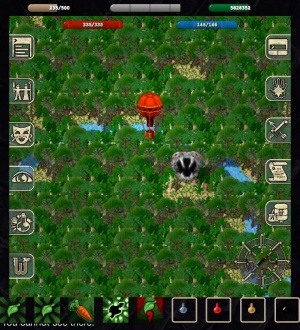 Step 9: Go north until you see another snake cave surrounded by gates, and a grey altar in front of it.

Step 10: Drop the red pearl on top of the altar (don't worry it won't twinkle and disappear) and the gates will lower. Enter the Cavern.

From the entrance map you can only go west. West of the entrance map is a 3x3 grid of tunnel maps. One of them has Mitch (the guy crushed by a boulder). It's always the NE most map (left from entrance map, then north). The bottom three maps in the 3x3 grid each have a down staircase. It shuffles which staircase goes where, but there will be one that goes to the collector, one to the 'red carpet' room, and one to a map with nothing but a Kali.

Step 11: Head to each of the south-most 3 maps in the 3x3 grid. In each you're looking for a boulder you can push to reveal a staircase. Find the one with the collector in it. The collector will tell you a password, and that he has agents helping him that you can contact. Step 12: Go back upstairs and head to Mitch's map (NE-most map of the 3x3 set). You will see a poor adventurer crushed by a boulder named Mitch. He will tell you you need to find a chalice, make a note of what kind he says. (small bronze chalice or whatever he says) 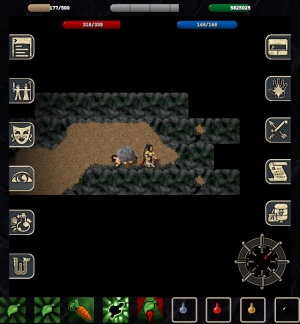 Step 13: Now you have to find another boulder and staircase combo, it'll be one of the other 2 of the 3 southern most maps (the other one will lead to just a Kali demon). Step 14: Down the staircase you will enter a sand tiled map with a red carpet. Follow the carpet to the right, and you will "fall" into another map with a portal. There will be sand demons to fight. Go up two maps and there will be a door northwest and northeast. Step 15: Take the Northeast map first, go north one more map and then you will enter a sidescroller map. 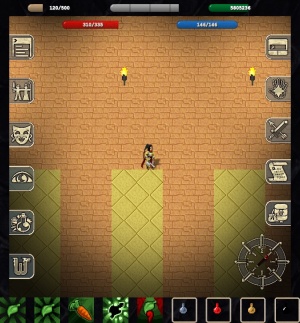 Step 16: You have to fall in one of the pits to pick up a key. It is the 3rd or 4th drop. Pick up the key and then go back to the sidescroller but this time don't fall and go to the next map. there will be an undead priest tied to a fence. Speak to him, tell him the password, and then speak to him again and type help. He will give you a small diamond. Step 17: Now go back to the map with 2 doors, and take the northwest map. There is a maze here and you have to go through some hidden walls. You have to use the skeleton key from earlier. Step 18: Follow the maps, until you get to some undead thieves. You have to kill them both as one is holding a gold key needed to enter the next room. Step 19: Now go to the next room and pick up the chalice that Mitch said to grab. Take the chalice back to the collector from step 11. Congrats you have completed the quest.